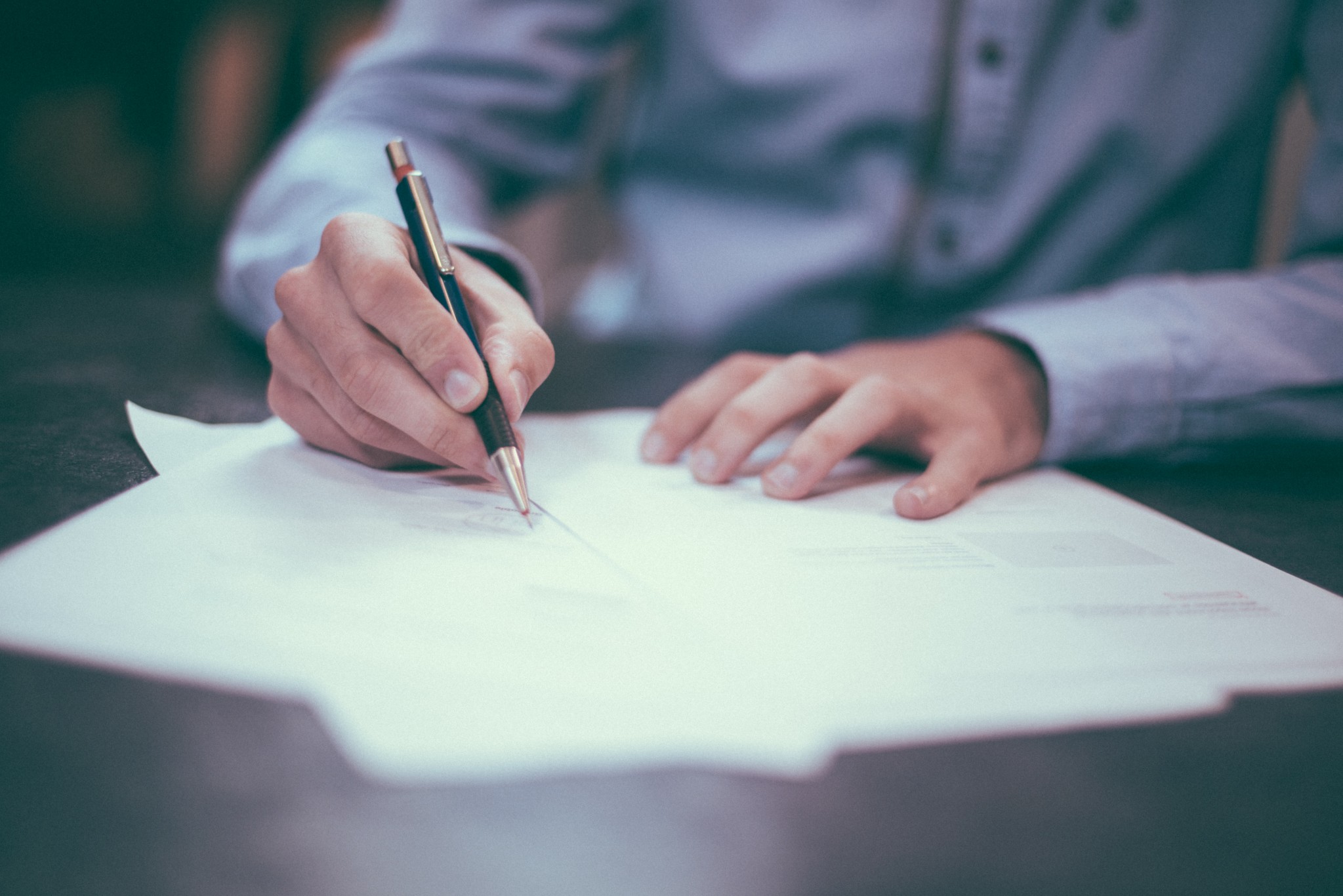 I sat fidgeting in an uncomfortable chair that was placed adjacent to my boss’ expansive desk, feeling the sweat already start to tickle my forehead. I kept picking at a piece of torn upholstery toward the bottom of the seat, despite my best attempts to look cool, calm, and collected. But, no matter how many articles I crank out about successfully putting in your two weeks notice, I’ll admit it’s pretty tough to look confident and composed when you’re quitting your job.

That’s exactly what I was doing. I was seated across from a man who had been my manager for years—starting when I was just a college intern to when the company took me on full-time—and explaining to him that I was hitting the road.

“So, I guess you could consider this my two weeks’ notice,” I said to him while doing my best to avoid any direct eye contact. “Oh, here, I put it in writing too, in case you need that or, like, something,” I added while practically throwing him an unsealed envelope and simultaneously trying to edge my way out of the room.

“Well, this is a surprise,” he said, with a forced smile on his face. “Where are you going? Did you receive a better offer elsewhere?”

I swallowed nervously, took a deep breath, and attempted to keep my voice from trembling. “No, not exactly,” I replied, trying to stifle the nauseous feeling that was slowly rising from my stomach to my throat.

“So, why are you leaving?” he pressed, “Where are you going?”

“I want to be a freelance writer. I’m going to do that full-time,” I quickly responded.

His face said it all. Like so many others, he was confused as to why I would leave the comfort and security of a traditional, full-time job (and, hello, health benefits!) for a life of uncertainty as a freelancer.

I wanted to explain to him that this was something I just had to do. I’d been thinking about it for ages, and I could no longer tolerate it being only that—a thought. I needed to take action and give it a try.

But, in reality, I didn’t say any of that. Instead, I kept my mouth shut. Why? Well, the truth of the matter was I didn’t really have a plan that I could share with him. Sure, I had one big client that I was hoping would carry me until I could get things off the ground (that client actually ended up dropping me only a few months later, but that’s a story for another time). But beyond that, I didn’t have any other potential opportunities lined up. I lived in a small town with very few connections to the type of work I wanted to be doing. I really had no idea how I was going to go about running my own freelance business. Oh, and I had absolutely zero clue how I was going to pay those pesky things called bills.

As someone who loves security and predictability, to this day I have no idea what came over me. But, regardless of the fact that I didn’t really know what was coming next, I quit my job anyway.

Looking back, jumping ship from my full-time position with no firm back-up plan in place probably wasn’t the smartest thing. And, I’m definitely not trying to encourage you to march into your own boss’ office tomorrow and use that exact same tactic—unless you’re prepared for a lot of shameless crying into an open carton of those delicious (and somewhat addicting) frosted animal crackers.

However, I do think taking that terrifying leap of faith was one of the most enlightening career experiences I’ve had so far. Call it stupid, impulsive, or brave—at the very least, it was educational. Here are a few of the (many, many, many) things I learned.

1. You Don’t Need the Approval of Others

When I would tell people about my plan to sprint away from my cubicle in favor of the freelance life, I so desperately wanted them to reassure me with statements like, “Oh wow, you’re so brave!” “Good for you!” or even a friendly and dad-like, “Go get ’em, tiger!”

Unfortunately, that’s not really what I got. Instead, I was faced with a lot of, “Wait, you’re doing what?” types of comments.

In the end, it really didn’t matter. I was the only one who needed to feel good about my decision. And I did—at least in between the animal cracker crying sessions mentioned earlier. Yes, we all naturally crave approval and reassurance from others every now and then. But, trust me, you don’t need it—at least not as much as you think you do.

There’s a reason that people fork over wads of cash in order to see a horror film about possessed grandparents or to walk through a haunted house where someone is guaranteed to leap out with a chainsaw. There’s a big part of being terrified that makes you want to run and cry—but the other piece is actually somewhat thrilling.

In the first few days (ahem, alright, months) after leaving my full-time gig, I’d sit down at my computer and feel totally overwhelmed. Every day was a battle to try to scrounge up work and at least take one step in the right direction. But, at the same time, I felt absolutely exhilarated. I had no idea what was coming next, and that actually made me feel surprisingly motivated and optimistic. It was one of the most distressing, nauseating, and anxiety-inducing times in my life—but it was also the most exciting.

3. You Never Know Until You Try

I hate to sound like a cheesy, cliché high school commencement speech. But, this sentiment really does ring true. You have no idea what you’re capable of until you push yourself to try it.

I’ll be honest—it’s not that I strongly disliked my full-time job. However, it didn’t set my heart on fire either. A big chunk of my duties were administrative. And, while I did perfect the art of mail merging like a total boss, I didn’t really feel all that challenged or fulfilled by my work.

However, as a self-described creature of habit, I think that I likely could’ve dealt with that mundaneness for the rest of my life. There was a big part of me that figured I was suited for that sort of life and career. It was safe and predictable. I was content.

Fast forward to now, and I’ve accomplished things that I never even thought were a possibility for me. I’ve been published places that I assumed were mere pipe dreams. I’ve worked with people who are essentially celebrities in my eyes. Just think—none of it would’ve happened if I had stayed with the “safe” route.

4. Your Career Really Doesn’t Define You

We all have the tendency to use our careers to define ourselves. But, it’s important to remember that your job isn’t who you are—it’s what you do. As Muse Managing Editor Jenni Maier explained in her article about being laid off, your position definitely adds to your life, but it doesn’t make up the entirety of it.

When I left my job, I felt the need to justify my decision and clarify every last detail until people were literally snoring in front of me. There was this immense need to explain my employment situation in order to give myself a purpose and identity.

Turns out, that’s really not the case—all of that pressure to define myself using my career was totally self-imposed. In fact, most people honestly didn’t care if I was a dog walker or the Dalai Lama. Although, above anything else, they were most likely just wondering why I gave them a play-by-play career breakdown when all they asked was, “Paper or plastic?”

Jumping ship from my full-time job was undoubtedly one of the scariest career decisions I’ve made in my life thus far. But, even though it had my knees shaking and my palms sweating, I’m glad I did it. It’s worked out well so far, and I’ve managed to learn a lot along the way.

So, if you’re contemplating taking your own leap of faith anytime soon, I hope these lessons encourage you and help you see the light at the end of the tunnel. And, in those moments when all you feel is sheer panic? Well, reach out to me on Twitter. I’ll come running—frosted animal crackers in tow.

Source: https://www.themuse.com/advice/4-lessons-i-learned-from-quitting-my-job-with-no-backup-plan?ref=the-muse-editors-picks-2
Author:  Kat is a Midwest-based freelance writer. Say hi on Twitter @kat_boogaard or check out her website.